Here’s a look at the cover for Atomika #8 by our own, Claudio Castellini. “Besides being among the greatest cover artists on the planet, Claudio is a good friend,” said Sal Abbinanti, Mercury Comics’ Creative Director and creator of Atomika. ” To see this cover come from the early sketches and thumbnails to the final was, for me, exciting to watch. It’s really not often you get to see the thinking process behind an artist like Claudio. I think the cover speaks for itself.”

Claudio Castellini entered the world of comics in 1986 by winning the first prize at the ninth International Convention of Prato. Quickly after that he joined the staff of ‘Dylan Dog’. Castellini was influenced by Marvel illustrators like John Buscema and Neal Adams. After a series of covers, Castellini realized the graphic novel of ‘Silver Surfer’. Claudio Castellini also illustrated a number of copies of ‘Amazing Spider-Man’ and ‘Conan the Barbarian’ as well as being featured on covers by nearly every major comic publisher. 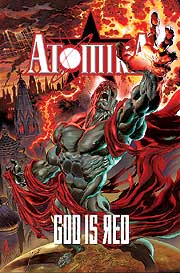 Renowned artist Claudio Castellini has launched his first ever official art website at http://claudiocastelliniart.com featuring news on his upcoming work, galleries, and original art, much of which has never been available to the public before.

Castellini made his debut in 1989 with a story for Dylan Dog, a popular Italian horror character published by Sergio Bonelli Editore, which was followed by another one in the September of the following year. In 1991 he was the graphical creator of Nathan Never, a science-fiction series for which he drew covers until number 59.

His love for technical details, influenced by artists like Neal Adams and John Buscema, was at its best in his first story for Marvel Comics, a Silver Surfer graphic novel written by Ron Marz. After covers for Comic Powers Unlimited and Elektra Magazine, a stint on Fantastic Four Unlimited (1993-1995), he worked to the crossover Marvel vs. DC, which made him popular to the American audience.

In addition to galleries and news updates, ClaudioCastelliniArt.com also features exclusive downloadable wallpapers, and a large selection of original art for sale, including comic art featuring the Fantastic Four, Spider-Man, Silver Surfer, Atomika, Red Sonja and a number of the original pages from the Marvel vs. DC crossover series.